For the last couple of years I’ve taken a Lenten break from Facebook and Twitter to clear my head for a while.

Life is certainly more peaceful without them but I do miss things too: breaking news on Twitter; chit chat on Facebook, with those little glimpses of someone’s life that gives you a comfortable sense of a connection sustained.

Every Easter I wonder whether to reinstall the apps and, so far, I have. Its not that I haven’t known that an account on Facebook is a deal with the devil, but, believing myself to be savvy enough to recognise the advertising, the echo chambers, the nudges one way or another, I’ve thought, what’s the harm in
a joke shared, or an anecdote? It’s not as if I would ever publish something really sensitive or private.

I now know that its not as simple as that. We need to take account of something called ‘surveillance capitalism’:

‘Surveillance capitalism’ was the term coined in 2015 by Harvard academic Shoshanna Zuboff to describe this large-scale surveillance and modification of human behaviour for profit. It involves predictive analysis of big datasets describing the lives and behaviours of tens or hundreds of millions of people, allowing correlations and patterns to be identified, information about individuals inferred, and future behaviour to be predicted. Attempts are then made to influence this behaviour through personalised and dynamic targeted advertising. This is refined by testing numerous variations of adverts on different demographics to see what works best. Every time you use the internet you are likely the unwitting subject of dozens of experiments trying to figure out how to most effectively extract money from you.

This is from an excellent article in Open Democracy by Jennifer Cobbe. It’s well worth looking up.

As is the Talking Politics podcast that referenced it – an illuminating discussion about ‘what Facebook is doing to us and can anything make it stop?

We’ve ended up with an internet built not for us – but for corporations, political parties, and the state’s increasingly nebulous ‘security’ demands. We need to better understand this problem so that we can challenge it.

Maybe this is the year I let lent last a little longer.

I’ve just come across a very useful article in the Guardian with all the links you need to find out just what Facebook and Google know about you. Its worth checking. Google is an extraordinary tool for mass surveillance:

I drove home last week from a friend’s funeral reflecting on the way that grief will always find you unprepared. It is so particular – to person and circumstance. You can be caught out by its absence as much as by an unlooked for depth and intensity.

At K’s service, I hadn’t anticipated such a sense of loss. We hardly met face to face, had drifted apart after a disagreement over a year ago, yet I found myself, in the silence of the crematorium chapel, filled with sadness for the loss of her voice. So much of our friendship, the respect I held her in, sprang from the sound of it, found most often in her writing: fluent, intelligent, always ready with story or example, full of wit and humour, insight and mischief.

The sense of affront was a surprise too. I ought to be familiar with how arbitrary life can be – but I was angry with death that day – K’s loss was premature; death, rude and unmannerly. After all K was one of us, mid-stride in her life. She should have lived. She ought to have lived.

Afterwards I found comfort in this thought, taken from Iris Origo’s wonderful partial autobiography Images and Shadows. Thinking about her own griefs she writes:

‘All that I can affirm is what I know of my own experience: that though I have never ceased to miss my father, child and friend, I have also never lost them. They have been to me, at all times, as real as the people I see every day, and it is this, I think, that has conditioned my attitude both to death and to human affections.

It is very easy, on this subject, to become sentimental or woolly, or to say more than one really means. I think I am only trying to say something very simple: that my personal experience has given me a very vivid sense of the continuity of love, even after death, and that it has also left me believing in the truth of Burke’s remark that society – or I should prefer to say, life itself – is ‘a partnership not only between those who are living, but between those who are living, those who are dead, and those who are to be born’. Not only are we not alone, but we are not living only in a bare and chilly now. We are irrevocably bound to the past – and no less irrevocably, though the picture is less clear to us, to the future. It is this feeling that has made death seem to me not less painful, never that – for there is no greater grief than parting – but not, perhaps so very important, and has caused my affection, in its various forms, to be the guiding thread of my life’.

Past, present and future

ROSPA has a whole fact sheet devoted to the ill effects of moving the clocks forward and back proving fairly comprehensively that it’s a bad thing on all sorts of levels.

For me it’s personal – from the sense that, when we lose an hour tonight I will feel robbed – if only of an hour’s sleep – to the days of adjustment, feeling slightly jet lagged while your body catches up, to a childhood memory of early mornings shared with my father.

When I was eight or nine years old, I was an early riser with a very regular internal clock. I don’t remember the time we went to bed but, in the summer, I woke up at 6.00am without fail. Dad, who had to leave for work by 7.00am, was already awake and I’d go downstairs, clothes quickly pulled on* and share a cup of tea with him, a bite of breakfast and the pleasure of being the only two up and awake.

I had a job too – I’d run around to the newsagents to pick up dad’s newspaper (in those days the Sketch and the Mirror). Mr Huxley, the newsagent would beam at me, promising me work as a paperboy when I was old enough. Inevitably, by the time I was 13, this sort of early rising was well behind me.

After dad set off up the road I entered a sort of happy limbo, when, I felt, normal rules no longer applied. I’d mooch around exploring all the places I knew I shouldn’t. I’d steal my baby sister’s rusks and take a swig of her gripewater. Feeling it couldn’t do me any harm I’d take a swig of cough medicine too. Then, at about 7.30 I’d set off for school, meandering through the town, by the brook and on the riverbank with all the time in the world.

Alas, it was a summer dream only – when the clocks went forward in October I woke at exactly the same time, an hour later – dad gone to work and the house starting to stir around me…

*Memories of getting dressed as a child still represents a sort of gold standard for me. In the summer it was pants, shorts and tshirt and you were good to go. Winter added a little more wool, but it was still pretty swift. Getting dressed as an adult is so boooring in comparison. 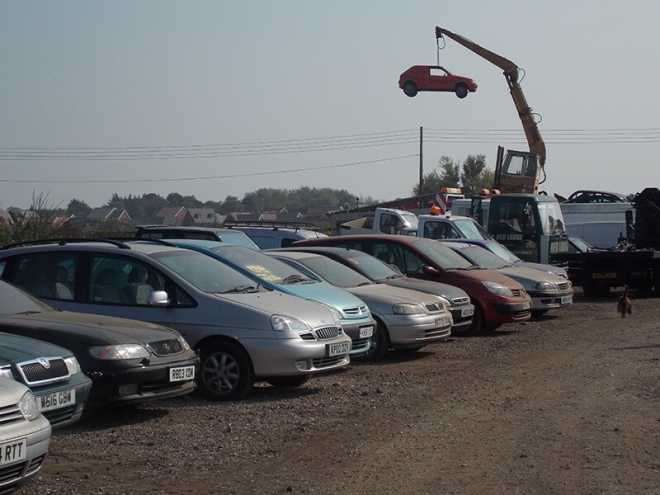 Driving home today we saw a car hanging from a crane like a body from a gibbet. A vision of the future, perhaps? From a time when wrecks like this one will be exhibited by our autonomous masters as awful reminders of what happened when humans thought they were in control.

The March of AI

Browsing in the best bookshop in Britain* (IMHO) on Thursday, I was nosing around Geoff Dyer’s book, The Ongoing Moment – a Book About Photography and found, in its opening paragraph, this quotation: 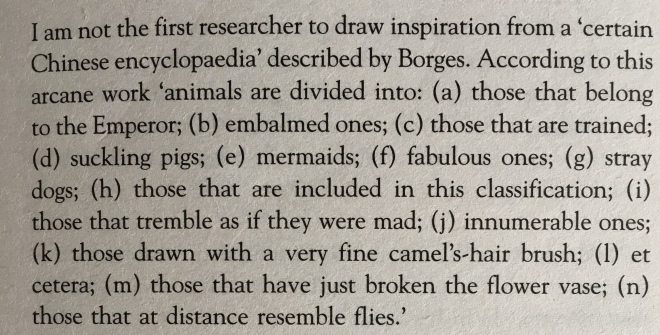 A few minutes later C came over to show me a book of poetry she was thinking about buying, called Loop of Jade by Sarah Howe. It’s epigraph was this: 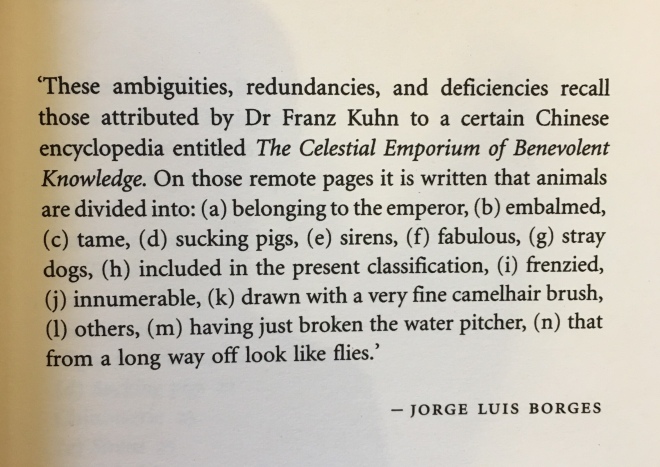 Small coincidences are surprisingly satisfying aren’t they? I’d never seen the quote before, or been charmed by the idea of a Celestial Emporium of Benevolent Knowledge (surely something sorely needed in a world full of ill intentioned information), but I felt at once as though I was in tune with the universe.

Reader I bought the Geoff Dyer.

It’s only when I set the two quotations down in this post, that I realised the they are not identical.

*Topping and Company in Ely.